When the word modern is uttered, the initials T.S. come to mind. When the word poetry is mentioned, the name Eliot follows. T.S. Eliot, in a word, exemplifies what modern poetry is all about.

Eliot began one of his greatest poems at the dawn of the twentieth century amidst the increasing industrialization, never-before-seen technological inventions like subways and telephones, and urbanization which resulted in overcrowded conditions in cities. Western civilization was changing at a rapid rate which resulted in an upheaval of the social collective consciousness. Eliot portrays this sense of psychological and, to an extent, physical alienation as a result of industrialization, technology, and urbanization in his poem, “The Love Song of J. Alfred Prufrock.”

“The Love Song of J. Alfred Prufrock” was published in Poetry magazine in 1915 at the persistent entreaty of Ezra Pound who became Eliot’s mentor (Byam, 365). World War One had begun the previous year, and due to the technological advances, the devastation and death wrought by mankind against mankind was unlike anything ever seen before. Machine guns and deadly gases killed more and more effectively, and trench warfare turned the beautiful, natural landscape into a scene of dread and mud. The War was a turning point for mankind. The knowledge that man was capable of inflicting death and destruction on one another and the Earth scarred people with a certain insecurity. In a way, no one was safe any longer.

Though the War is not referenced in “Love Song” as it is in “The Wasteland,” the alienation and insecurity is still very much present. Eliot introduces the poem with an excerpt from Dante’s Inferno. This excerpt is of the character, Guido da Monteleltro, who relays his disgrace to Dante because he believes Dante is trapped in hell and will not be able to tell anyone on Earth. As Barbara Manca points out, “It enlightens the perspective with which the poem has to be read: a love song that Prufrock tells with no intention of directing it towards the loved one, or towards anyone at all” (258).

After the introduction, the poem begins with one of the grimmest images and suggests to the reader that this is not going to be a Keats’ love poem by any stretch of the imagination. “Let us go then, you and I / when evening is spread out against the sky / like a patient etherized upon a table” (“Love Song” I. 1-3).  An etherized patient is one who has been numbed and can no longer feel pain. This can be related to Prufrock’s own numbness or to the world’s in general. With the rapid cultural changes (think changing morals like “restless nights in one-night cheap hotels” and  greater excesses all leading up to the Great Depression), urbanization, technological advances like automobiles, subways, telephones, along with the global war, and it is easy to fathom the kind of subconscious shock and numbness that would ensue.

Prufrock continues, “Let us go, through certain half-deserted streets…streets that follow like a tedious argument / of insidious intent / to lead you to an overwhelming question / Oh, do not ask, ‘What is it?’ / Let us go and make our visit” (“Love Song” I. 4, 8-12). And what is the question? Prufrock does not say but given his references to the women coming and going and talking about high-falootin and pretentious things such as Michelangelo, one could surmise the question may pertain to the purpose of life. Does Prufrock’s existence, or anyone’s for that matter, mean anything? Is there meaning to such  inconsequential things like Michelangelo, “the cups, the marmalade, the tea…the sunsets and the dooryards and the sprinkled streets…the novels…the teacups…the skirts that trail” (“Love Song” XIIII-XV. 88, 101-102)? Will it even matter at all if Prufrock would “disturb the universe” and step out of his own head and into life?

Even if the answer is yes it does matter- Prufrock’s descending the stair matters – Prufrock unfortunately suffers an insecurity that makes him impotent. “Time for you and time for me / and time yet for a hundred indecisions / and for a hundred visions and revisions” (“Love Song” V. 32-33). Prufrock is indecisive and the indecision leads him to play out life in visions, in his imagination, where he can revise and alter, and never actually have to live. And yet he can’t help but wonder, “‘Do I dare?’ And ‘Do I dare?’” (“Love Song” VIII. 38).

Though information, at the turn of the century, was able to be relayed much quicker via telegraph, and people were no longer separated by miles and miles of country, in many ways people were more isolated. People were living in apartment rooms, separated from one another by walls. Prufrock mentions these “lonely men in shirt-sleeves, leaning out of windows” (“Love Song” XI. 72). Because growing industry required labor, cities became increasingly populated. Prufrock describes the effects of industry which paints a polluted and yet highly sensual image, “The yellow fog that rubs its back upon the window-panes / the yellow smoke that rubs its muzzle on the window-panes / licked its tongue into the corners of the evening” (“Love Song” III. 15-17). This is not only a description of industrialized-smog but also of Prufrock’s own sexual desires. Caught between the Victorian Era with its refined morals and sensibilities and the Jazz Age with its loose morals and sexual liberation, it is no wonder that Prufrock has sexual insecurities.

With Prufrock’s insecurities comes a kind of defeat. He says, “For I have known them all already, known them all / have known the evenings, mornings, and afternoons / I have measured out my life with coffee spoons” (“Love Song” IX. 49-51). One day that is like the next and the next after that. Prufrock’s life seems to be a tedious strand of redundant moments and this fills him with an anxiety, “The eyes that fix you in a formulated phrase / and when I am formulated, sprawling on a pin / when I am pinned and wriggling on a wall / then how should I begin” (“Love Song” X. 56-59). Even if he descends the stair, he is already formulated, wrapped up nice and tidy in other people’s perceptions. He’s been labeled with his receding hair line, his thinning arms and legs, and his “collar mounting firmly to the chin” (“Love Song” VIII. 41-42, 45).

And indeed there will be time to wonder, “Do I dare?” and, “Do I dare?” Time to turn back and descend the stair with a bald spot in the middle of my hair –

The idea that Prufrock is stuck living the same day in and out under the questionable perceptions of who he is causes an internal crisis. Prufrock seems to desperately want to express himself in a way other than the one he and society has demanded but he is not even sure what he wants to express, “That is not it at all / That is not what I meant at all” (“Love Song” XV. 109-110). It is as if Prufrock is suffering an identity crisis brought on by the convergence of two different eras.

In true Modernist form, there is no conclusion to “The Love Song of J. Alfred Prufrock”. The poem ends with Prufrock reflecting on growing older, “I grow old…I grow old / I shall wear the bottoms of my trousers rolled” (“Love Song” XVI. 120-121). He imagines walking on the beach hearing the beautiful mermaids singing to one another but he decides, “I do not think they will sing to me” (“The Love Song” XVIII. 125).

I have seen them riding seaward on the waves combing the white hair of the waves blown back when the wind blows the water white and black.

The last stanza in the poem is haunting and confirms that the whole experience of the poem has indeed been in the mind of Prufrock. As Prufrock wanders down the streets within his mind, he is insecure, anxious, indecisive, wriggling, and growing old…but he is ok. It is only when Prufrock is pulled back out of his mind and into the real world of true alienation resulting from all of the changes that are taking place at the turn of the century that he truly suffers, “We have lingered in the chambers of the sea / by sea-girls wreathed with seaweed red and brown / Till human voices wake us, and we drown” (The Love Song” XX. 129-131). 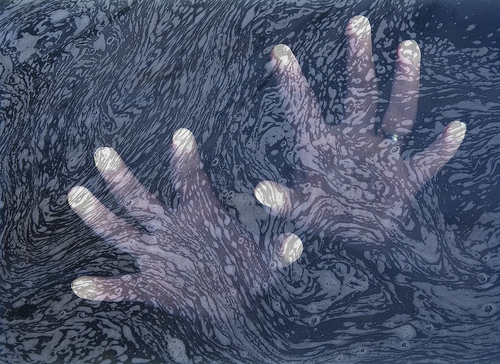